Special Secretariat for the Protection of Unaccompanied Minors

The Special Secretariat for the Protection of Unaccompanied Minors was established with paragraph 3 of the first article of the Presidential Degree 18/2020, operates according to Articles 35 and 42 of the Law 4622/2019 and falls within the competences of the Deputy Minister of Migration and Asylum

Its mission is to plan, implement and supervise the National Strategy in Greece for the protection of unaccompanied minors. The Special Secretariat also initiates and implements all necessary policies and required actions to ensure the protection and well-being of third-country nationals and stateless individuals who are unaccompanied minors or separated from their families. More specifically, the Special Secretariat initiates and implements policies in each of the following key areas:

Management of accommodation and relocation requests for unaccompanied minors:

Conduct and evaluation of hosting facilities and supervised apartments for minors. In relation to this area, it has the following responsibilities:

Support with regards to social integration of unaccompanied minors:

Safeguard of the institutional protection of unaccompanied minors. In relation to this key area:

National Emergency Response Mechanism includes a hotline that assists in identifying and locating children in need (0030- 2132128888 και 0030- 6942773030, via WhatsApp ή Viber) that is available in 6 languanges, and in the following days and hours.

The Helpline and the Mobile Units in the field:

Hercule Moskof is the Special Secretary for the Protection of Unaccompanied Minors since January 2022. 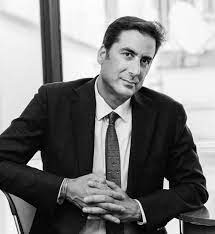 Heracles Moskof studied Sociology and Social Anthropology in London and received a PhD from the London School of Economics, in Sociology with a focus on political culture of contemporary Greece. He has served as the Expert Ambassador Consultant for issues of Human Security and Migration Policy for the Ministry of Foreign Affairs.

In 2013, with the implementation of the relative Directive of EU for the composition of the national coordinative mechanism of tackling human trafficking, he was appointed head of the Office of the National Rapporteur on Trafficking in Human Beings. In this role, Dr Moskof was responsible for implementing the National Referral Mechanism for the protection of victims of human trafficking, of the National Action Plan 2018-2022, as well as the ‘Actions for tackling Human Trafficking’ of the Ministry of Foreign Affairs, in the framework of the Business Program ‘Reformation of Public Sector 2014-2020’ of the National Strategic Reference Framework (NSRF).

Hercules Moskof has represented Greece in the National Coordinators' Committee of the EU, of the United Nations, of the Council of Europe, and of the Organization for Security and Co-operation in Europe (OSCE).

Dr Moskof has also worked as a Teaching Instructor in the Civilisation & Media Department of Panteion University and has taught in the English-speaking Master’s degree of the National Kapodistrian University of Athens "MSc in Media & Refugee/Migration flows." His studies have been published, among others, in the OSCE, the Hellenic Foundation for European & Foreign Policy (ELIAMEP), the Maragopoulou Foundation, etc.