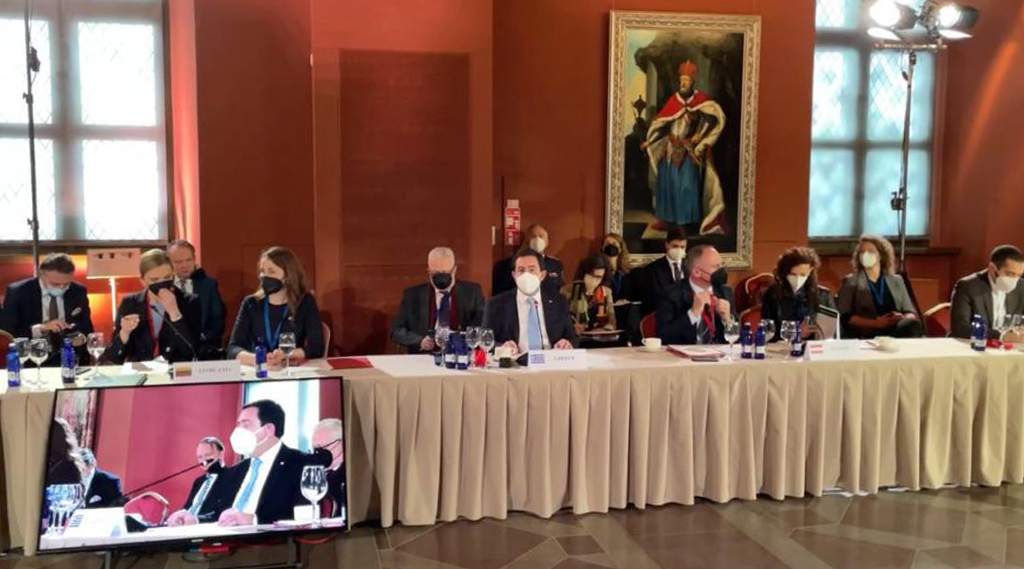 N. Mitarachi from Vilnious: ‘‘The EU has land and sea borders. These cannot be differentiated according to their nature or topography, but must be treated as an aspect of the exercise of sovereignty - Countries at the EU's external borders must be able to make use of the available technological tools both on land and at sea, including the creation of natural barriers where necessary, in order to prevent illegal arrivals. "

The purpose of the Conference was to launch the necessary discussion between the EU Member States, the associated Schengen States and the European institutions (Commission, competent bodies) on the major issue of EU external protection against migratory flows and the need to prevent illegal entry.

After the end of the Conference, the Minister of Migration and Asylum, Mr Notis Mitarachi stated that‘’in order to become more resilient and prevent future migratory crises, like the ones that Greece faced for several years since 2015 and like what Lithuania and Poland have recently experienced member states must coordinate their actions and policies.’'.’’

Regarding the current debate on reforming the Schengen Borders Code, and the ongoing negotiation for a new Migration and Asylum Pact, as well as the concept of border protection, Mr Mitarachi pointed out that:in order to ensure early prevention of illegal arrivals in the EU, our firm position, which is also reflected in the Joint Statement that we have adopted today, is that border protection is the only sustainable way for any common European migration and asylum system to properly function.’’.

Subsequently, Mr Mitarachi emphasised that :‘’the EU has land and sea borders. These cannot be differentiated according to their nature or topography, but must be treated as an aspect of the exercise of sovereignty - Countries at the EU's external borders must be able to make use of the available technological tools both on land and at sea, including the creation of natural barriers where necessary, in order to prevent illegal arrivals. "’

We, the Representatives of Austria, Bulgaria, Croatia, Cyprus, Denmark, Estonia, Greece, Hungary, Ireland, Latvia, Lithuania, Malta, Poland, Romania, Slovakia and Slovenia, have met on 20-21 January 2022 on the occasion of the Conference on Border Management in Vilnius, and after extensive discussions on possibilities, tools and measures to scale up our efforts in tackling current challenges and preventing future crises, have found the common ground on the following:

In this context, we welcome the Presidency's intention to have a political discussion on border management and Schengen cooperation and its determination to reach a substantial and balanced compromise on the Pact on Migration and Asylum.