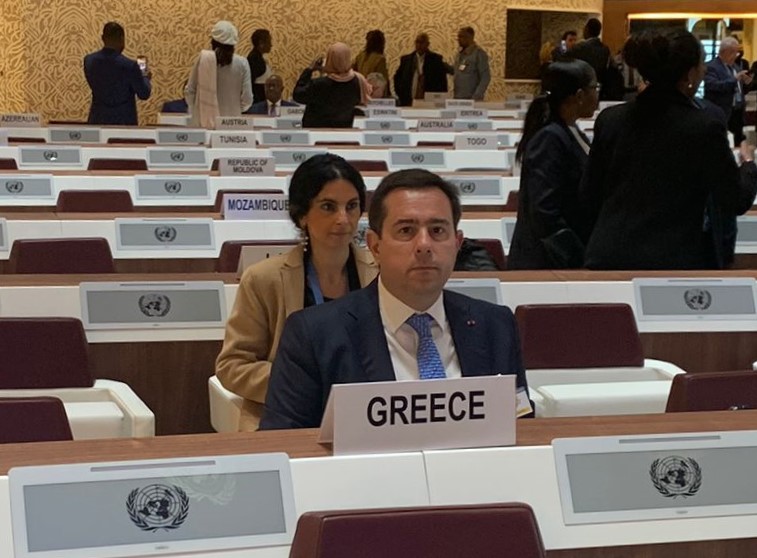 N. Mitarachi: Smuggling networks today, get to decide who enters Europe, Greece is committed to protecting its borders.

Speech by the Minister of Migration and Asylum, Mr. Notis Mitarachi, at the 73rd Session of the Executive Committee of the United Nations High Commissioner for Refugees

At the Palais des Nations in Geneva, Switzerland the Greek Minister of Migration and Asylum, Mr. Notis Mitarachi, spoke on Monday (10/10) in the context of the 73rd Session of the Executive Committee of the United Nations High Commissioner for Refugees.

In his speech, Mr. Mitarachi focused on the extreme practices followed by smugglers both on land and at sea, stressing that the exploitation of human life at the altar of money has the impact of dozens of deaths, as happened a few days ago in Lesvos and Kythira. “We see today smugglers taking advantage of people, making fortunes transferring migrants, undertaking extreme risk, as we see fatalities, especially at sea”, said the Minister of Migration and Asylum.

Mr. Mitarachi continued, pointing out that the criticality of maintaining the integrity of the Asylum System, which protects Europe's shared values: “It is critical to preserve the integrity of the Asylum System, protect our common values. Providing asylum to those in need, but actively discouraging asylum shopping, while continue fighting against smuggling networks. We need to provide shelter to those requiring international protection – under International Law, but in a coordinated way. As was the case of the EU coordinated response on Ukraine, activating temporary protection mechanisms and granting the right of free movement to displaced persons. Some argue that the European Asylum model is broken. Most arrivals do not originate from countries at risk, as defined in the Geneva convention. Smuggling networks today, get to decide who enters Europe.”

At the same time, once again, Mr. Mitarachi, underlining the active role of Greece in protecting Europe's borders: “Greece is committed to protecting its border. Border protection is pressing, in times of instrumentalization of migration, when human suffering yields to geopolitical strategies.”

The entire speech of the Minister of Migration and Asylum, Mr. Notis Mitarachi in detail:

Greece is fully aligned with the European Union statement, and we will make some remarks in a national capacity.

We need to do more to resolve global inequalities, as well as lack of democracy and respect for human rights, in many parts of the world. Europe can do more to relocate people in need. Greece will participate in such efforts.

We need to do more to provide opportunities for people to prosper, and everyone is entitled to want a better future. Providing more visas to people to come and work in Europe, but with rules.

Having said that, the Geneva Convention was not an encompassing tool to resolve all global injustices.

Transferring migrants between countries, safe countries, signatories of the Geneva Conventions, countries Members of the Council of Europe.

It is critical to preserve the integrity of the Asylum System. Providing asylum to those in need, but actively discouraging asylum shopping.

We need to provide shelter to those entitled to international protection in a coordinated way.

As the EU did in the case of Ukraine, activating temporary protection mechanism and granting the right of free movement within the European Union.

Some may argue that the European Asylum model is broken. Most arrivals today do not originate directly from countries at risk.

Smuggling networks today, get to decide who enters Europe.

And free movement of recognized refugees within Europe is still restricted and returns of those not entitled to protection is difficult and that affects public opinion on migration.

This model has to be broken by providing legal pathways, explore screening mechanisms before arrival to Europe and providing within the European Union a mandatory relocation mechanism to all countries.

So as to avoid the first reception countries facing uneven, unfair, pressure.

Greece is committed to protecting its border in line with international law.

Especially in cases of instrumentalization of migration, when human suffering yields to geopolitical strategies.

It is prescient in the face of migrant smuggling, when human suffering yields to financial gain.

We need to get the EU / Turkey 2016 Joint Statement back on track.

We welcome UNCHR efforts to increase prevention of unlawful departures, to step up its efforts to combat smuggling networks and working efficiently with governments.

Greece over the last eight years has welcomed over one million refugees.

This year we anticipate 35.000 asylum applications.

Since 2019, we have drastically improved in asylum, reception, and the protection of unaccompanied minors.

We have placed particularly emphasis to the protection of unaccompanied minors. This is a strategic priority for us, and we have worked successfully, with our EU partners, on relocations.

We invest actively in the integration programs offering full access to health, education, and employment to all recognized refugees.

We are doing our part.

But as migration constitutes a key challenge, during these turbulent times, we need to devise collective efficient management systems, share best practices, create a common European protection space, but most importantly stand together on the issue.

In line with our common values.