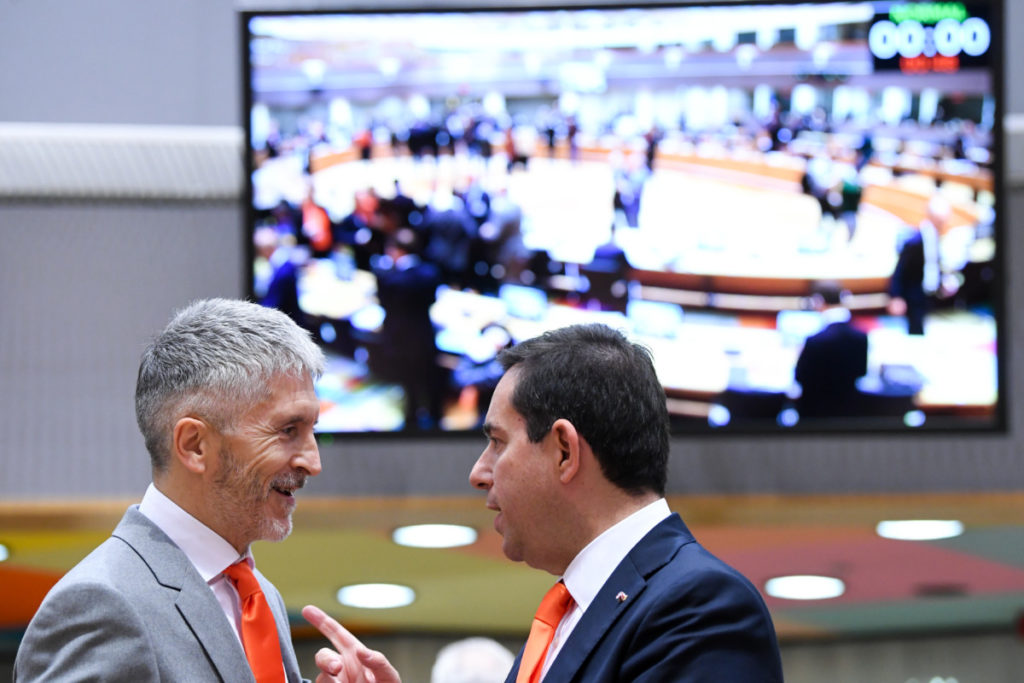 Notis Mitarachi: It’s time for solutions, to ensure that the 2016 EU-Turkey joint statement goes ahead

Statement by the Minister of Μigration and Asylum, Mr. Notis Mitarachi, during his visit to the extraordinary Council of Justice and Home Affairs of the European Union

The Minister of Migration and Asylum, Mr. Notis Mitarachi is in Brussels today, on the occasion of the extraordinary Council of Justice and Home Affairs of the European Union.

“We have been talking for too long about a solution to immigration. It is time for solutions, actions and results”, emphasized mr.Mitarachi. As he said, the Commission’s proposal is clearly on the right track, a solution must be found on the Central Mediterranean route, but also “we must ensure that the EU-Turkey joint statement of 2016 is implemented by all parties”. The Greek minister emphasized that “in the last two years we have been talking disproportionately about the responsibilities of the front-line member states”.

Upon entering the Justice and Home Affairs Council of the European Union, the Minister of Migration and Asylum, Mr. Notis Mitarachi made the follow statement:

"We have been talking far too long about the European solution to the migration crisis. It is time for solutions, actions and results. The proposal of the EU Commission today is clearly on the right path. We need to find solutions for the Central Mediterranean Route, but also we need to ensure that the EU-Turkey Joint Statement of 2016 is implemented by all parties.

In the past few years, we have been talking dis-proportionally about the responsibilities of front-line member-states. We need also to talk about solutions to reduce the level of irregular arrivals to the European Union and for providing a mandatory solidarity mechanism to ensure that all member-states in Europe serve for better migration in an equal way. It is not a time to fly solo. It is a time for a European solution and I’m confident that it will be a good meeting today.”

Minister Mitarachi then answered questions from journalists and foreign correspondents:

Currently we have around 18.000 asylum seekers in 34 camps in Greece. Overall, in the last seven years we had over 1 million arrivals in Greece, we’ve been a key entry point for the crisis of Syria, especially in 2015 and 2016. The level of arrivals has increased in Greece in line with the increase of arrivals throughout Europe. In general, I have to say that from the total arrivals expected in the frontline member-states unfortunately the voluntary mechanism will only relocate less than 1% of total arrivals to the MED5 countries this year.

I think Europe needs to work with Turkey we have an agreement in 2016. Turkey has undertaken itself to prevent irregular departures from Turkey and also to ensure for the return of those that are not deemed eligible for international protection. I’m very sorry to say that despite our best efforts since March 2020, Turkey does not accept the return of those not entitled to protection.

It seems that the voluntary mechanism itself is not sufficient to ensure that there is a fair burden sharing between the EU. It is critical that we put on the table again the discussion for a mandatory mechanism, where all countries share the burden. Also, what happened with Ukraine sets up a very interesting president. Europe has agreed that people coming from Ukraine, they are automatically recognized as refugees, which is absolutely correct. At the same time the European countries waved internal borders. Europe created a common European protection space for people that are displaced from Ukraine. This is a president that we need to take into account when we talk about other recognized refugees coming from other parts of the world. Europe needs to be a common European protection space for all that are deemed eligible for international protection under the Geneva Convention.

It seems that the appetite for solidarity is lower than the level of arrivals and this disparity needs to be addressed both ways. Europe needs to find ways and the proposal today from the Commission to act on the central Mediterranean route to reduce the level of people departing from Africa, providing humanitarian support, providing development support acts for the one side of the equation. On the other hand, I think European countries need to be more generous on a mandatory relocation mechanism to ensure that all countries face similar pressure.

It is clearly on the right track, all points raised will probably have the support of the member-states, there is the implementation side, so it is critical that all things are agreed today that actually are implemented in an efficient and fast way. We need to see tangible results. We need to see measurable outcomes. There will always be more questions that they need to be addressed. We are also meeting next week, as you know, if things are not resolved today, there will be more time for discussion next week.

I think it is important to understand the pressure Austria is also facing. I was recently in Vienna; I regularly meet with the Austrian Minister of the Interior, and this is an issue that also needs to be resolved for the case of Austria. Obviously for Greece the extension of Schengen to Bulgaria, Romania and Croatia is a key priority for our foreign policy. We would hope that very soon all EU member states can and should join Schengen. This is a critical part of European common space and European integration.

I think that it is important that overall Europe discuss in the context of Frontex a common policy on protecting the external borders of the EU.  This needs more Europe. I think the issue of accession of Bulgaria and Romania is something that it is already discussed. The Greek position is very clear. We are in favor of the accession of Bulgaria, Romania, and Croatia into Schengen.

Everyone in Europe understands that flying solo is not the solution. Every country is facing some different problem regarding the migration. So it is critical that we find a common solution that addresses the challenges, obviously is the synergy of the member states. And I think we have synergy to put in place for migration.

Before the Council, the Minister met with the Swedish Minister of Migration, Maria Malmer Stenergard, in view of the Swedish Presidency starting on 1st of January 2023. The two Ministers discussed and exchanged views on the developments in migration, as well as the challenges that the European Union is called upon to face in migration and the steps that must be taken, with the aim of dealing with illegal migration.

Then, Mr. Mitarachi attended a meeting with the rest of the MED5’s members, within the framework of the Extraordinary Justice and Home Affairs Council following the recent Summit in Paphos, with the aim of better coordinating their positions.