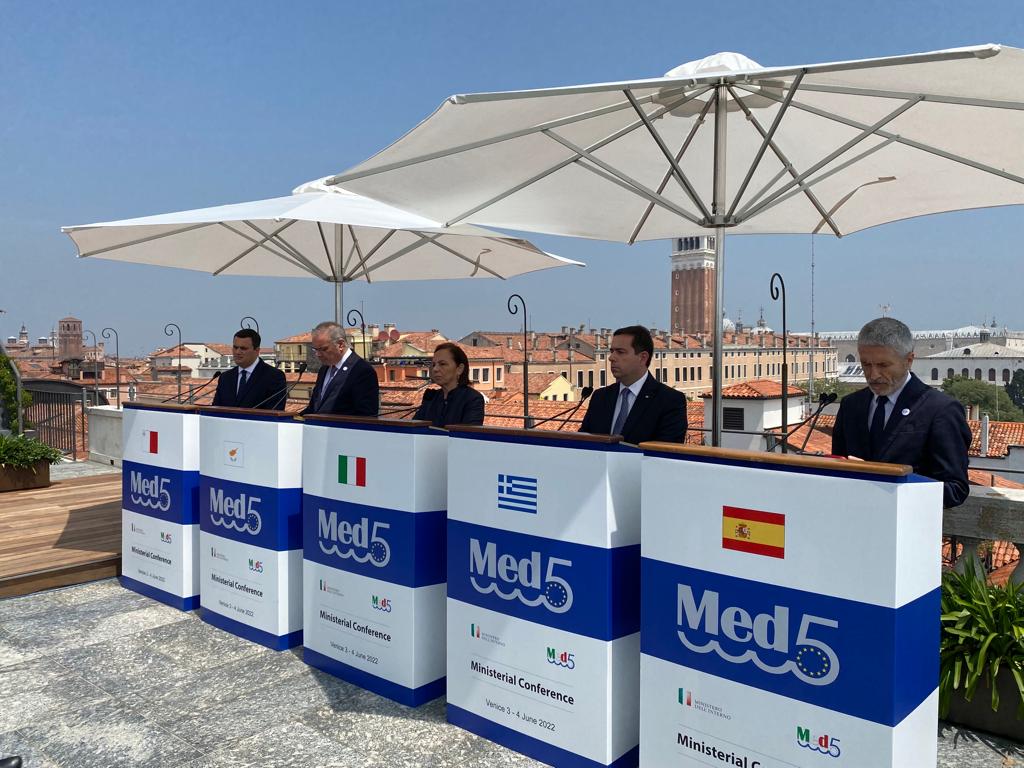 N. Mitarachi: “Turkey must deliver on its own commitments towards the EU, including under the 2016 EU-Turkey Joint Statement. Recent provocative rhetoric by Turkey, in terms of challenging Greek sovereignty, is counterproductive and not contributing to a spirit of trust and cooperation.”

Participation of the Minister of Μigration and Asylum Mr. Notis Mitarachi in the 3rd Med5 Ministerial Meeting Medheld in Venice

The Minister of Migration and Asylum, Mr. Notis Mitarachi, participated in the 3rd Ministerial Meeting of the Ministers of Interior and Migration of the Med5 group (Greece, Italy, Spain, Malta, Cyprus), held in Venice.

The aim of the meeting is the optimal coordination of the positions of the group of five EU member states on the new European Immigration and Asylum Pact.

In his speech the Minister of Migration and Asylum emphasized the importance of the immediate reaction of European Institutions and the Council in Ukrainian crisis, which paved the way for a new approach towards migration and asylum issues and set new standards, such as the abolition of internal borders and the creation of a Common European Protection Space.

Together with the Ministers of Italy, Cyprus, Malta and Spain,Mr. Mitarachi said “we agreed that only a balanced and fair common European policy on migration can be a functioning one. In our view, the imperative need for solidarity to front-line countries goes hand by hand with the enhanced protection of the external borders of the EU and this is why we need a FRONTEX with strong political and operational mandate to support national efforts.’’

Additionally, to the above Mr. Mitarachi highlighted the need for more emphasis on the cooperation with origin and transit countries, so as to prevent illegal arrivals and boost returns and mentioned the following:

“Turkey must deliver on its own commitments towards the EU, including under the 2016 EU-Turkey Joint Statement. Recent provocative rhetoric by Turkey, in terms of challenging Greek sovereignty, is counterproductive and not contributing to a spirit of trust and cooperation.’’

Furthermore, Mr. Mitarachi referred to the necessity to fight illegal migration and smuggling

“we cannot let the smugglers choose who will enter Europe, the Minister of Migration and Asylum stated, “therefore, Greece is investing in bilateral cooperation schemes with origin countries offering more opportunities for work permits in exchange of a better cooperation in returns. We signed the first such agreement with Bangladesh and we stand ready to develop similar cooperation with other origin countries.’’ concluded the Minister of Immigration and Asylum ".

TheJoint Statement by the MED5 Ministers5

We have confirmed to the current and incoming Presidency our support for a step-by-step approach on the negotiation of the European Pact on Migration and Asylum, and we have encouraged the French Presidency to continue along the lines drawn up on the solidarity mechanisms with the aim to deliver immediate and tangible solidarity where needed through a concrete mechanism.

On the Declaration on the solidarity mechanism, in order to effectively reduce pressure on frontline Member States, it is essential to ensure the participation of a critical mass of Member States and associated countries in relocation.

Indeed, we - Italy, Cyprus, Greece, Malta and Spain - are convinced that this is the best way to seek balanced solutions between the responsibilities and the necessary solidarity that all Member States are called upon to show. This balance needs to be reflected at each step of the process.

Moreover, the Ukrainian war has demonstrated the unity of the European Union and its ability to express solidarity with Ukraine and the Member States providing protection to millions of refugees fleeing the conflict. The mobilisation of the EU in the case of Ukraine set new standards that need to be reflected in the ongoing negotiation of the Pact.

This is a united position of the Mediterranean countries, which goes with the the importance of promoting external border protection and developing the European Union's action towards third countries to prevent departures and ensure cooperation in the field of returns and repatriation, including through the definition of special European partnerships with the countries of origin and transit of migratory flows.

Today's meeting confirms the attention of the French and Czech Presidencies to our expectations and reaffirms the constructive spirit of the Mediterranean countries.