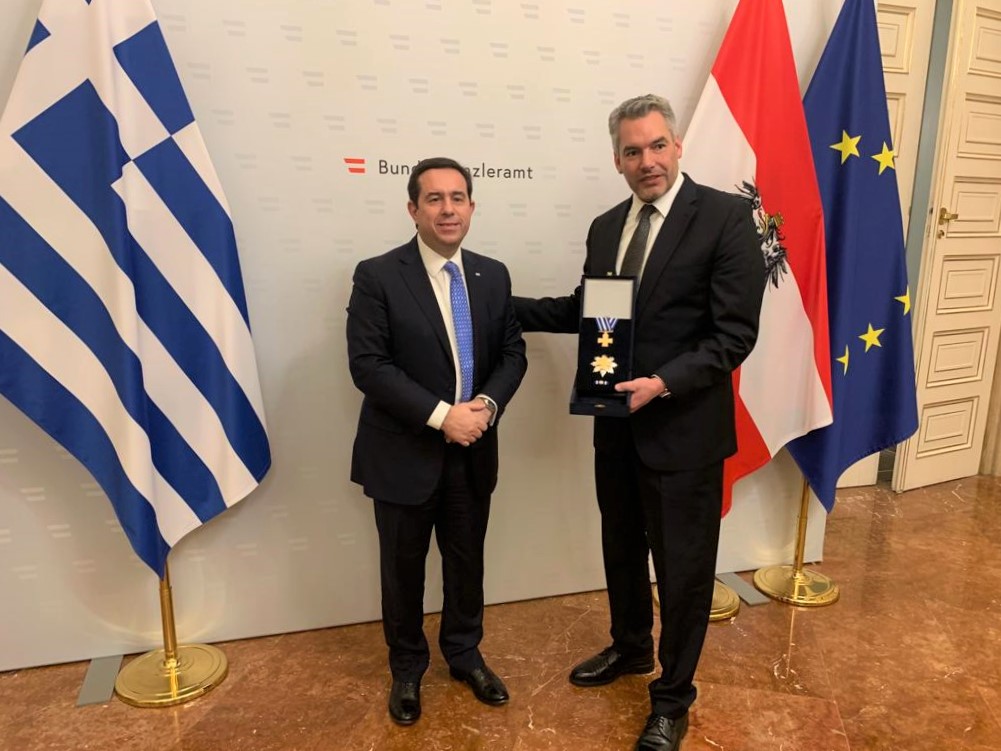 N. Mitarachi: “Greece is committed to protecting the external borders of the Union - We need to combat those that exploit human suffering for financial gain”

Meeting of the Minister of Migration and Asylum Mr. Notis Mitarachi with the Chancellor of Austria Mr. Karl Nehammer, in Vienna

During his two-day visit to Austria, the Minister of Migration and Asylum, Mr. Notis Mitarachi was received by the Chancellor of Austria, Mr. Karl Nehammer, to whom he presented the Greek positions for the management of migration in Europe.

On the occasion of their meeting, Mr. Mitarachi awarded Chancellor Nehammer the Commendation Medal of First Class Migration Assistance, for his personal contribution as well as the whole Austrian’s Government during the crisis in Evros, by sending selected units of Security personnel on the front line.

‘’Greece and Austria share a vision on the need for European Member States to support one another in times of crisis, especially when faced with instrumentalisation tactics. We would like to acknowledge the support provided by Austria to Greece during the events in Evros in March 2020. Austria reacted rapidly by dispatching members of the EKO Cobra force to patrol the border and resist the instrumentalization tactics employed by the Turkey at the time.’’

In their one-on-one meeting, the Minister of Migration and Asylum and the Chancellor of Austria, discussed a wide range of issues related to migration management, with particular emphasis on the protection of the EU's external borders but also on the negotiations for the new European Pact for Migration and Asylum.

In particular, Mr Mitarachi emphasised that:

‘’it is a common stated priority that our external borders need to be protected. This was made clear during the recent Vilnius Summit, co-hosted by our two countries. Border protection is the key to guaranteeing the integrity of the Schengen Area. It is also key to dismantling human smuggling networks. We need to combat those that exploit human suffering for financial gain. Greece is committed to protecting the external borders of the Union. In doing so, it controls potential secondary migration flows to Austria. We cannot allow smugglers to choose who enters the territory of the Member States of the Union.’’

Regarding the ongoing negotiations for the new Migration and Asylum Pact, the Minister of Migration welcomed the approached of the French Presidency, namely the gradual approach to the Pact and reiterated ‘’the need to progress on responsibility (and especially the Screening Regulation) by allowing for maximum flexibility for frontline Member States. Each border has its specificity, and this must be taken into account.’’.

More specifically, on solidarity, ’Member States need to agree on a mechanism which can deliver immediate, tangible solidarity to Member States under pressure. We need to be clear on the deliverables of solidarity, the number of States willing to participate and the level of commitment by those States. As for Greece, any discussion on the Pact proceeds from the need to avoid any congestion in the Closed Controlled Access Centers at the borders. We cannot repeat Moria. Therefore, we are advocating for a relocation mechanism, which is triggered when the capacity utilization of these centers exceeds 50%.’’ pointed Mr. Mitarachi.