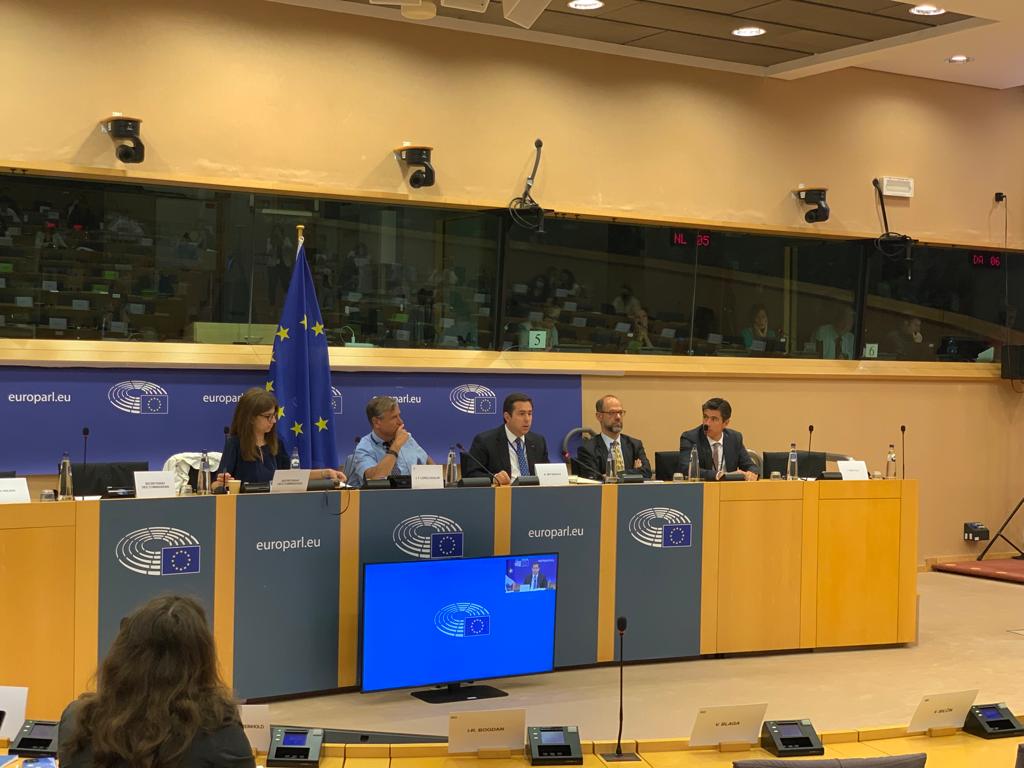 N. Mitarachi: ‘’Greece would expect an even more active role of EU institutions, in calling Turkey to abide by its commitments under the 2016 Joint Statement - we are facing several provocations by Turkey against our sovereign rights, not least inflammatory, revisionist and legally unfounded statements concerning the status of the Aegean islands’’

The members of the LIBE committee of the European Parliament that met today, Monday 27 June 2022, were addressed by the Minister of Migration and Asylum, Mr. Notis Mitarachi, following the acceptance of the relevant request by the President of the Commission, Mr. Juan Fernando Lopez Aguilar.

Mr. Mitarachi had requested in his letter to provide detailed information on the Greek government's painstaking efforts to deal with the ongoing migration crisis, always in line with the EU acquis, while making extensive reference to the challenges posed by Turkey against to Greek sovereign rights, even with inflammatory, revisionist and legally unfounded statements about the status of the Aegean islands. "Greece is once again witnessing an increase in pressure on the land borders of Evros and the Aegean islands," he said.

‘’if Turkey had implemented their part of the agreement with the EU, we would not be having this discussion today. And every boat irregularly leaving Turkey, puts human lives at risk, each and every day. According to a considerable number of testimonies from asylum seekers, Turkish authorities are actively encouraging illegal departures.’’

In addition to the above, Mr. Mitarachi pointed out that:

"Greece would expect an even more active role of EU institutions, in calling Turkey to abide by its commitments under the 2016 Joint Statement and fully implement its provisions, namely preventing departures, stopping pushforwards, and accepting returns of those not eligible for protection."

Mr. Mitarachi referred extensively to the Turkish provocations by saying that:

‘’we are facing several provocations by Turkey against our sovereign rights, not least inflammatory, revisionist and legally unfounded statements concerning the status of the Aegean islands. These threats clearly violate international law and raise real and immediate security concerns on the borders. Despite these difficulties, over the past three years, in cooperation with the Commission, we have worked towards substantially improving the situation on the ground.’’

Regarding the situation in Evros, in recent months, Mr. Mitarachi explained that: ‘’smuggling networks have devised a new method of circumventing border controls and manipulating the European Asylum and Justice system. Smugglers abandon groups of migrants on islets created by the seasonal low flow of the Evros river. Then they notify specific NGOs, which specialize in border crossing facilitation.These NGOs in turn notify the Greek authorities claiming that they are in peril, and also file with the European Court of Human Rights. With the latter reacting by indicating interim measures, which of course, do not prejudge the merits of any case.’’

‘’Greece protects the EU’s external borders and intercepts illegal attempts to enter EU territory. But it does so in fully respecting fundamental rights and above all the right to life. And we enhanced our regulatory framework through more involvement of independent monitoring mechanisms to make sure that any allegation is appropriately investigated.’’