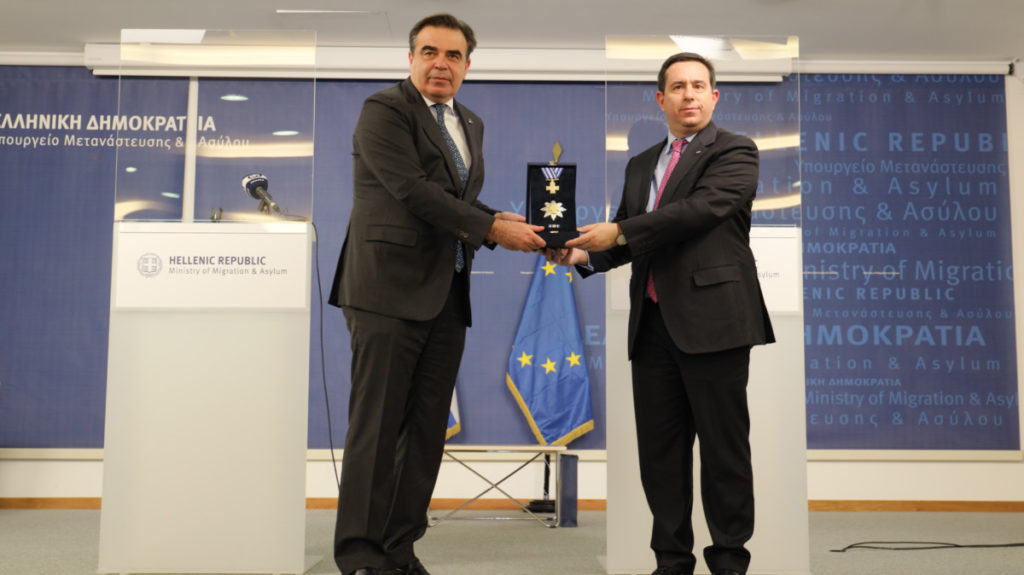 N. Mitarachi: ‘’The tragic incident on the Turkish side of the Greek-Turkish borders highlights the need for Turkey to comply with its obligations under the Joint Statement between EU and Turkey, to prevent illegal departures - I am confident that Europe will continue to stand by its Member States who consider their borders and the continent’s non-negotiable."

M. Schoinas: "" Greece today manages the migration with a clear plan, tangible results and is a pioneer in the co-shaping of a coherent European policy’’

Awarding of first – class Commendation for migration assistance to the Vice President of the European Commission Mr. Margaritis Schoinas by the Minister for Migration and Asylum Mr. Notis Mitarachi

The Minister of Μigration and Asylum, Mr. Notis Mitarachi, awarded a first-class Commendation for migration assistance to the Vice President of the European Commission responsible for the Promotion of the European Life and values. Mr. Margaritis Schoinas, for his contribution in tackling the migration crisis, as well as its impact on local communities.

Specifically, Mr. Mitarachi pointed out that"in March 2020, when Greece accepted the unprovoked attack of Turkey through the instrumentation of migration, Mr. Schoinas stood by us, mobilizing the European institutions on the side of Greece and highlighting the need for effective protection of external borders.''

Since then, added the Minister of Migration and Asylum, Mr. Schoinas''has significantly assisted our efforts to regain control over migration and to implement a strict but fair migration policy, which is already bearing fruit in terms of significant reduction of migrants, accelerating asylum process and creating decent reception centers. Equally important has been its role in the recent crisis caused by the instrumentalization of migration on the EU's eastern border with Belarus, helping to decompress the situation and strengthen the affected Member States."

The Minister of Migration and Asylum further added that "on the joint initiative of Greece, Lithuania, Poland and Austria, we met in Vilnius two weeks ago where the majority of the EU member-states concurred for the need to effectively protect the borders. Then, the Minister added, that he is confident “that Europe will continue to stand by member states that consider the borders of their countries and the continent non-negotiable."

Mr. Mitarachi also referred to the tragic incident with the death of 19 migrants on the Turkish side of the Greek-Turkish border, which, as the Minister of Migration said,"highlights the importance of combating illegal migration and networks of smugglers. At the same time, it highlights the need for Turkey to comply with its obligations under the 2016 Joint Declaration to prevent illegal departures and to transform itself into a credible partner of the EU and on the crucial issue of migration. "

The Vice President of the European Commission, Mr. Margaritis Schoinas, pointed out that “Greece today manages the migration with a clear plan, tangible results and is a pioneer in the co-shaping of a coherent European policy. From the sad symbol of non-Europe, which was Moria, we were together a few months ago in the closed controlled access centers of Samos, Leros and Kos that mark a more efficient, more European, more systematic phase in the management of migration flows for the benefit of refugees and migrants. As well as for local communities, which have shared a disproportionate burden in the past. “Greece's progress and efforts don't go unnoticed in Europe and certainly not after the decisive, historic experience we had with the European leadership in Evros in March 2020. The challenges we face remain significant. A genuinely holistic, coherent, and fair European approach to migration is the only way. And this solution will only pass the new European agreement on a Migration and Asylum pact that we have proposed to the European Commission", Mr. Schoinas concluded.