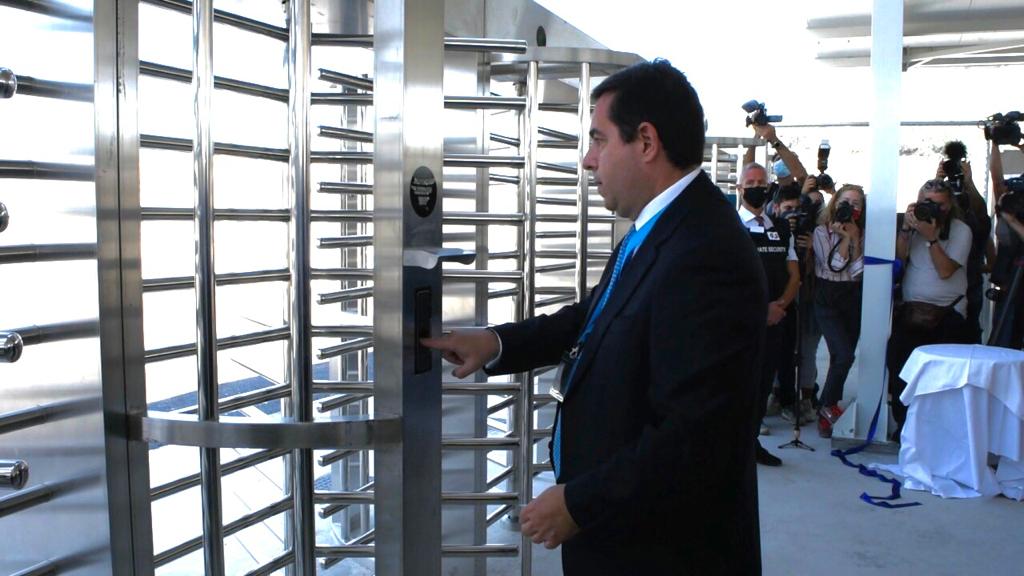 N. Mitarachi: ‘’The creation of a modern and safe new closed controlled access center in Samos and the abolition of the KYT in Vathi, marks a new period for migration. We keep our promises to the citizens of the islands’’.

It is a facility that aims to ensure decent living conditions for the asylum seekers but also to safeguard proper implementation of the necessary reception and identification procedures.

The new closed controlled access center in Samos, is developed in an area of approximately 154 acres, in the location "Zervou" of the Municipality of Eastern Samos and has a capacity of 3000 guests.

The whole new closed controlled access center is surrounded by a double NATO type security fence, in combination with a Closed Surveillance System (CCTV), which uses "smart" software in order to warn in time for any emergency events.

Present at the inauguration of the new closed controlled access center were, among others, the Deputy General Manager of DG HOME, Ms. Beate Gminder, the General Secretary for the Reception of Asylum Seekers,, Mr. Manos Logothetis and the  General Manager of the Sustainable Development Sector of MOS company MYTILINEOS, Panagiotis Gardelinos.

Τhe construction budget is about 43 million euros and is 100% funded by the Asylum, Migration and Integration Fund of the European Union.

During the ceremony, the Minister for Migration and Asylum, Mr. Notis Mitarachi, made the following statement:

Today's event is not just marking the abolition of the camp in Vathi, but also marks in overall a new period, which encompasses as a main characteristic the continuous and drastic reduction - in practice - of the impact of migration on local communities.

With great joy and satisfaction, I am welcoming you in the first closed controlled access center, in Samos. We are keeping our commitments towards the societies in the islands.

We have created a modern and safe new closed controlled access center for residents, employees and local communities, away from the urban area.

A new closed controlled access center that will give back the lost dignity, to people seeking international protection, but also the necessary conditions of safeguarding and restraint for illegal migrants who are to be returned / deported.

And so it turns into the frontline of a strict but fair migration policy which we apply from the first instance.’

Today Samos, where in a few days we will close the old camp in Vathi, handing over the area to the Municipality and the residents and making way for its usage, is turning the page. In a few months, Kos and Leros will follow and a little later, in 2022, Chios and Lesvos.

"The recent events in Afghanistan remind us that a European approach to migration is needed, now more than ever. They highlight the urgency of making progress on the New Pact on Migration and Asylum that the European Commission proposed one year ago. As President Von Der Leyen noted in her State of the Union address, it gives us everything we need to manage the different types of situations we face. It will provide the EU with a well-functioning common asylum and migration management system.

The new centre in Samos that we inaugurate today is a prime example of such a new, European approach, as it holds the promise of a better, controlled management of migration. And we look forward together with you to the opening of the centres on the other Aegean islands, on Kos and Leros, on Chios and on Lesvos.’’

‘Personally, I feel joy and satisfaction for many reasons, institutional, political and personal.

Firstly, because it starts the operation of a new closed controlled access center, which corresponds to the versions of the times. A European access center, not only because it was fully funded by the European Commission, but also because it essentially met European standards.

Secondly, because we are launching a new model for Greek data. The new closed controlled access center of Samos will have a model and precursor effect, as you will follow new Closed Controlled Access Centers, in Kos and Leros, and in the continuous management in Chios and Lesvos.

The third reason is personal. I feel great emotion because, in addition to the ties that connect me to the island, I lived and worked here as a doctor and Field Coordinator of the Medical and Psychosocial Level of EODY at KYT in Vathi which in a few days closes permanently.

And in fact during the years of the great refugee crisis, from 2015 onwards.’’

"We are proud that we managed to build a fully autonomous access center for our all those people who were forced to leave their homelands. Within an extremely tight schedule, without any discounts on the quality of construction.

It could not be done otherwise. The name of MYTILINEOS is now an international guarantee of quality. With perfect know-how, long experience and responsibility, MYTILINEOS is today a leading international industrial and energy company with a dynamic presence on all 5 continents. It is active in the fields of Electricity & Natural Gas, Metallurgy, Renewable Energy Development & Energy Storage and Sustainable Development Projects.’’