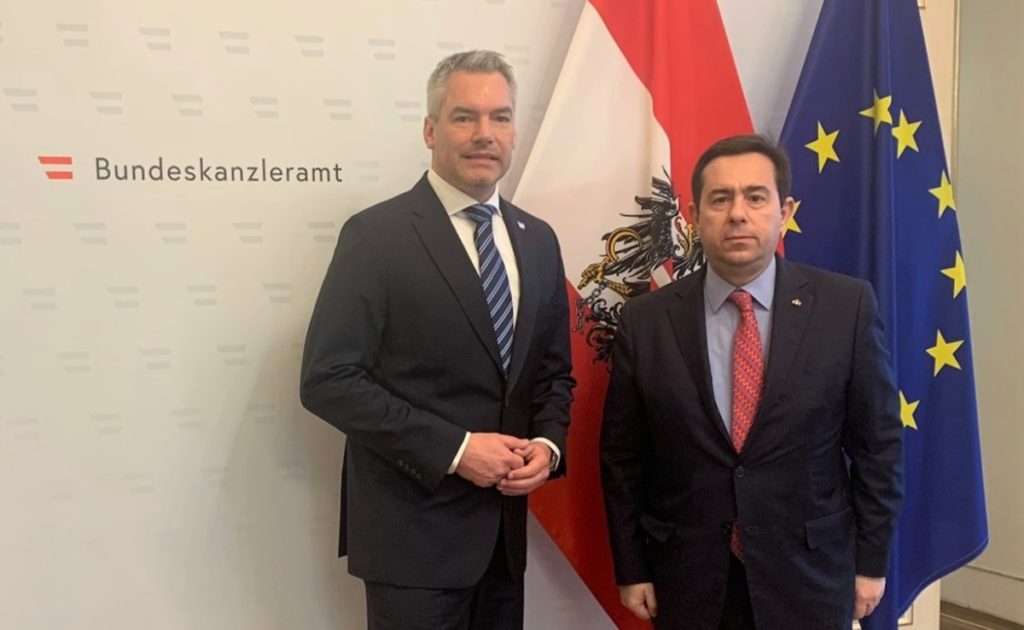 The Minister of Migration & Asylum, Mr. Notis Mitarachi, was welcomed today in Vienna by the Austrian Chancellor, Mr. Karl Nehammer, while yesterday he met the Minister of the Interior, Mr. Gerhard Karner.

Bulgaria and Romania joined the European Union in 2005 and in 2011 successfully completed the evaluation procedures for their integration to the Schengen area, which was endorsed by the Conclusions of the Council of Justice and Home Affairs of the EU on June 9th, 2011. Since then, the European Commission has repeatedly expressed the aspect that the two countries are ready to join the Schengen area without internal border controls.

In 2022, by Bulgaria and Romania’s initiative, a new EU field mission took place, confirming that the two countries continue to effectively meet strict Schengen standards and have an exemplary track record in implementing them.

This issue, as well as Croatia’s full integration in Schengen zone, was discussed at the Council of Justice and Home Affairs of the EU on December 8th, 2022. While Croatia’s application was unanimously accepted, Bulgaria and Romania’s applications were rejected due to objections by two countries (Austria and the Netherlands). The vast majority of the member states expressed support to the two countries, stressing that their integration would strengthen the credibility and security of the Union.

Greece supports the integration of Bulgaria and Romania, as it will contribute to the country’s economic activity stimulation, through a land connection with the Schengen area and enhance the security of the EU’s external borders.

The Minister of Migration and Asylum, Mr. Notis Mitarachi stated:

“Greece is taking the initiative to support Bulgaria and Romania’s application to join the Schengen zone. This enlargement will also bring direct benefits for Greece, which is now united by road with the other Member States of the European Union. I met here in Vienna with the Austrian Chancellor, Mr. Karl Nehammer, and the Minister of the Interior, Mr. Gerhard Karner, and I will visit Sofia and Bucharest next week. There are issues to be resolved, especially issues related to migration, the protection of our external borders, an issue which requires a more coordinated, but also a stricter, European policy. For this initiative we are in contact with the Swedish Presidency and the European Commission.”

This website uses cookies to improve your experience while you navigate through the website. Out of these cookies, the cookies that are categorized as necessary are stored on your browser as they are essential for the working of basic functionalities of the website. We also use third-party cookies that help us analyze and understand how you use this website. These cookies will be stored in your browser only with your consent. You also have the option to opt-out of these cookies. But opting out of some of these cookies may have an effect on your browsing experience.
Necessary Always Enabled
Necessary cookies are absolutely essential for the website to function properly. This category only includes cookies that ensures basic functionalities and security features of the website. These cookies do not store any personal information.
Non-necessary
Any cookies that may not be particularly necessary for the website to function and is used specifically to collect user personal data via analytics, ads, other embedded contents are termed as non-necessary cookies. It is mandatory to procure user consent prior to running these cookies on your website.
SAVE & ACCEPT
Scroll to Top
Γραμματείες
Διεύθυνση Ευρωπαϊκής και Διεθνούς Συνεργασίας
Νομοθεσία
Στατιστικά
Τεχνική Υπηρεσία
Τηλεφωνικός Κατάλογος
Χρήσιμοι σύνδεσμοι
Χάρτης ιστότοπου
Βιβλιοθήκη